My husband and I have a sick joke that we do things the hard way. It just seems to be a common theme in our life. Our friends recently had their baby boy, who came on the due date. The dad commented “Six good pushes and he was out!” I laughed and told my husband, “Don’t expect it to be that easy for us.”

Recently my husband has been confronted at work about when this baby was going to arrive. He’s an on call charter/corporate pilot and typically flies more than 20 days a month (including overnight/multiple day trips). His boss made a remark that he thought my husband has been lying about my due date because I’ve been full term for weeks and the baby hasn’t been born yet! Obviously this man knows nothing about babies even though he has two kids of his own.

All along his company has offered their congratulations and stated they would keep him close to home the month of April. He’s been doing day flights (we call them out and backs) and a few overnight trips. Up until this week it hasn’t been a problem!

There is a notoriously awful client who decided they needed multiple airplanes for an international 2 week trip. Usually, my husband would be stuck with the airplane abroad for 2 weeks. Did I mention it’s to a country that’s currently in a war?! Anyways, the big boss and his wife are stuck taking the plane abroad because my husband insisted he needs to be in Pittsburgh for the birth of his first child. My husband still has to fly the first leg of the flight because of the long flight time so they can switch crews. It’s a complicated schedule with multiple crews in multiple countries with a client who typically shows up late and changes plans last minute and screws everything up. 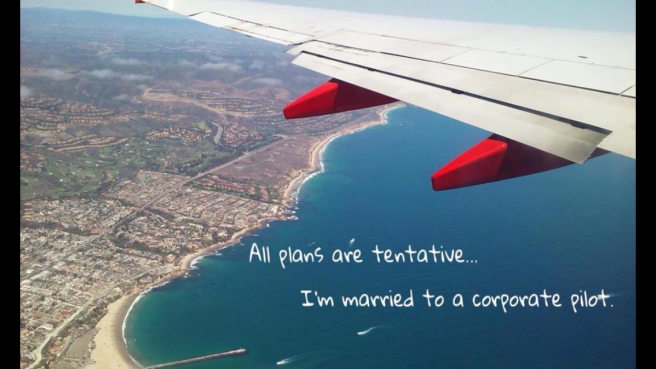 It’s pretty much my worst nightmare right now. I have a bad feeling my husband is going to end up stuck in Canada while I go into labor!

I feel like the stress of his work not cooperating with us just might make this baby come! My mom is coming over just in case so I’m not in Pittsburgh alone. We’ve been waiting for baby to drop and last night I started feeling a lot more pressure down below. Today also is 39 weeks exactly so we’re really getting close to the big due date!

I’ve always taken pride in my independence being married to a pilot. Heck, I’ve fixed busted pipes and broken down cars when he’s been out of town! But I really don’t want to deliver this baby without him. We worked way too damn hard to get here and he deserves to see his child born too.

4 thoughts on “How to have a baby with a pilot”